Falls are a major problem among the elderly.

They can result in injuries such as hip fractures, cause a decrease in physical activity that can lead to a person becoming isolated and depressed (post-fall syndrome), and represent a large cost to health and social care services.

In collaboration with the Glasgow City Council, the project ‘Supporting independent living’ aims to understand the reasons behind falls among the elderly - through the analysis of various data sources, including open data available from the UBDC - so that effective strategies can be developed to prevent them. In this blog, UBDC intern Etaine Lamy provides key takeaways and recommendations from the project report (PDF 1.01MB).

Falls among the elderly are a major geriatric issue, with 34% of those aged 65 and over falling every year in the UK. Falls are a particularly pressing issue as the population ages rapidly, with a predicted increase of 48.4% of the 65+ population by 2039 in Glasgow (from 2014/15). Health and social care services will face unprecedented demand while already under strong pressure to cut costs.

To put the financial costs of falls into perspective in Glasgow, we calculated estimates based on a 2013 study on the costs of falls for people aged 65 and over in Scotland. The study numbered the average cost of a community fall at £1,721 in 2011, adjusted for inflation this is equivalent to £1,924.9 in 2016. For the year 2014-15, the estimated cost is £54.6 million, of which 60% (£32.8 million) is borne by the City Council through social care. This amounts to 8.7% of the Glasgow City Council’s Social Work budget for Community Care for the same year. Taking into account the expected population increase, this would rise to £81.1 million in 2037.

Using 2016 Scottish Index of Multiple Deprivation (SIMD) quintiles from least deprived to most deprived, we find that deprivation is a strong predictor of falls among the elderly. The average number of ambulance calls for those from the least deprived areas (quintile 1) was 48 per 1000, while 70 such calls were made for the elderly from the most deprived areas (figure 1, panel B). A similar relationship is observed for serious falls leading to hospital admissions, with an average difference of 10 admissions per 1000 between the least and most deprived areas. One explanation for this is the relationship between poor health and deprivation, as there are many medical and behavioural conditions that can cause a fall (see below). 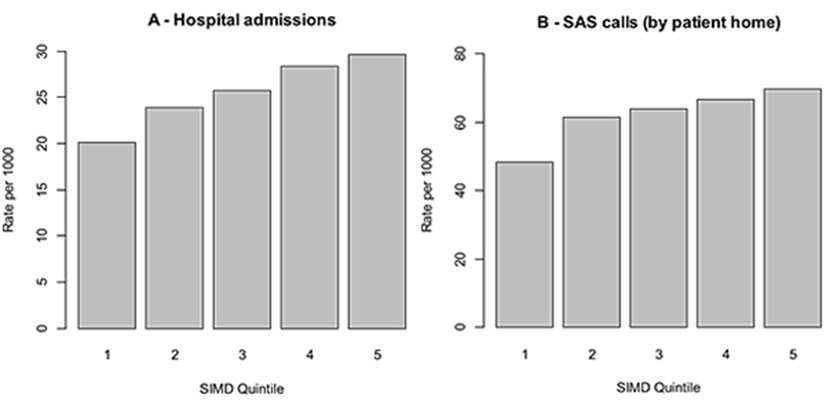 Poor pavement conditions were also found to be strong predictors of falls, with 104 more Scottish Ambulance Service (SAS) call-outs, recorded by incident location, for each additional pavement report on FixMyStreet.com - a platform which allows residents to report problems in public areas and then sends it to the relevant local authority. Busy pedestrian areas in the city centre also show higher numbers of falls-related SAS calls compared to other areas. This is consistent with previous research, which found that uneven pavement surfaces were responsible for the majority of outdoor falls. 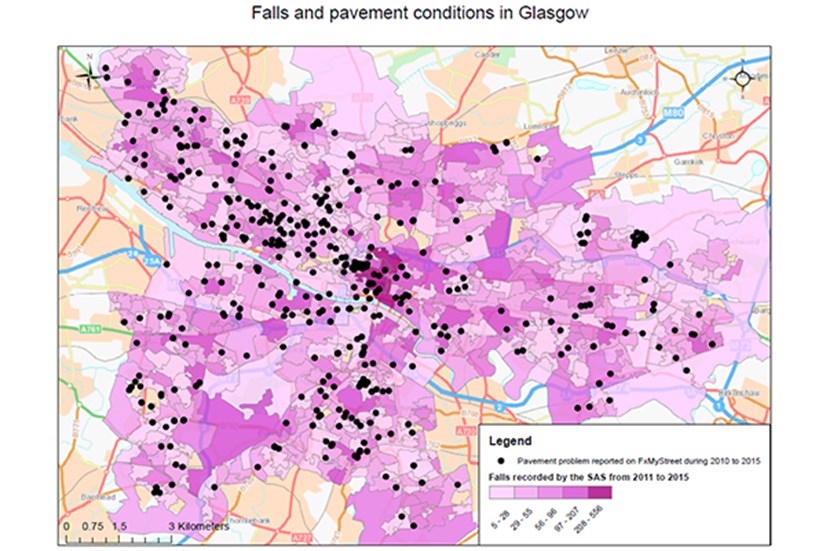 We also find a seasonal pattern, with an increase in falls during wintertime. On average, December and January recorded 511 SAS calls, for a year average of 477, while the number of admissions in December was 17% higher and in January 10% higher than the average.  A combination of two or more extreme weather conditions such as freezing temperatures, strong winds, rainfall and snow appears to predict an increase in falls.

As noted above, falls can be caused by medical conditions - such as dizziness brought on by heart disease – as well as the use of medication and other substances. Approximately 30% of those admitted to hospital (see Table 1 below) due to a fall also suffered from circulatory disease (i.e. hypertension, coronary artery disease, stroke). 15.3% of admissions were related to respiratory conditions (i.e. pneumonia, bronchitis, common cold or asthma). Alcohol consumption is also an independent risk factor for falls among the elderly. Our data shows that almost 10% of falls-related admissions to hospital among the 65+ population are related to a mental and behavioural disorder due to alcohol.

Table 1. Related causes of emergency admissions due to falls in Glasgow, financial years

Note: One individual may be diagnosed with several associated conditions and be counted several times in the above table.

In light of those findings, we recommend increasing efforts to adapt public environments to people with reduced mobility, such as ensuring clear, clean and even pavement surfaces and adapting streets and curbs. For example, a cost-effective multi-sectoral injury prevention programme in Sweden included the reconstruction of pavements and walkways, improved winter road maintenance, improved evening-time lighting, information on prevention in local media, revisions to the home environment and aided exercise walks for the elderly. Following this programme, falls decreased by 26% in the 65-79 age group.

The existing Community Falls Prevention Programme led by the NHS Greater Glasgow and Clyde would benefit from increased visibility as less than 3% of the at-risk population enter the service every year. Because older people do not always consider themselves at risk of falling, an invitation to an ‘ageing well’ assessment could be more effective than an invitation to a ‘falls’ assessment.

Finally, because unhealthy lifestyles affect a person’s health in later life, promoting healthy lifestyles at all ages is crucial to improving healthy life expectancy (the number of years an individual is expected to live in a ‘healthy’ state). In Glasgow, most fall-related hospitalisations (23.1%) during 2011-2015 were due to cardiovascular diseases. A focus on modifiable risk factors - such as diets high in saturated fats, cholesterol, being overweight, physical inactivity, smoking and excessive alcohol consumption - would yield positive results for not only the elderly but the whole population. 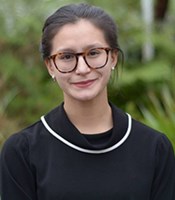 Etaine Lamy joined UBDC on a Q-Step internship and worked on the 'Supporting independent living through the prediction and prevention of falls' project.