Literacy has traditionally referred to ability in reading, writing and arithmetic.

The term now has a much wider meaning to cover skills and knowledge in a number of areas - including digital, languages and health – gained from a variety of situations including work, home and school. A team of psychologists in the School of Education at the University of Glasgow have used Urban Big Data Centre data from the integrated Multimedia City Data Project (iMCD) to analyse and visualise literacy inequalities in Glasgow. In this blog, Dr Catherine Lido explains how the team engages the public with the importance of various literacies through data representations that they can literally reach out and touch.

UNESCO (2003) defined literacy as ‘the ability to identify, understand, interpret, create, communicate and compute, using printed and written materials associated with varying contexts. Literacy involves a continuum of learning in enabling individuals to achieve their goals, to develop their knowledge and potential, and to participate fully in their community and wider society.” With the help of student interns, Michaella Drummond and Stefi Hahn, Dr Kate Reid and I have undertaken research in the area of ‘Lifewide Literacies’ (e.g. health, environmental, financial and digital literacies). Such knowledge may be gained from multiple contexts, encompass wider life skills (beyond traditional literacies, such as reading and maths), and are associated in the literature with a number of positive life outcomes (health, income and well-being).  We were therefore interested in the role of deprivation and precarity in re-producing lifewide literacy inequalities.

Big data (large, complex datasets gathered from a range of non-traditional sources) are increasingly being used by social scientists to address global societal challenges facing modern cities. The methods and approaches by which social scientists make sense of and interpret this data are not always made clear to the general public, community groups, citizen activists and key policymakers. Yet, it is these non-academic groups who can often make the most difference in society - through policy or grass-roots level action.

Therefore, using an award from the University of Glasgow’s ESRC Impact Acceleration Account, we sought to demystify and challenge conventions regarding how data can be represented for the public, using a variety of methods by which complex social questions can be answered through arts and design. We worked closely with independent social enterprise organisations in prototyping a range of highly visual and tactile objects, which represent a variety of ‘literacies’ in the socio-spatial urban context of Glasgow.

Developing a survey for understanding Glasgow

Part of the iMCD project included a representative survey of 1,600 households called ‘Understanding Glasgow’, which measured attitudes, behaviours and literacies (primarily knowledge or skills) in the areas of education, transport, sustainability, technology and cultural and civic engagement.

Developing a survey for ‘open data use’ by academics and non-academic stakeholders alike was an incredible challenge.  The draft survey content was compared against the 42 features of Learning Cities developed by UNESCO, to ensure the Educational Disadvantage and Place team - in the Glasgow School of Education - could explore key concepts for social inclusion and learning participation.

The survey collected a rich variety of information - including age, ethnicity, nationality, migrant status, relationship status and religion, as well as household information, such as work, housing and income. We were most interested in the data on learner engagement over the previous 12 months (formal, non-formal and informal learning) as well as data gathered from a subset of participants wearing GPS trackers.

An academic paper on ‘Older learning engagement in the modern city’ (Lido et al, 2017) has been published using this data.

Engaging the public with ‘Lifewide Literacies’ 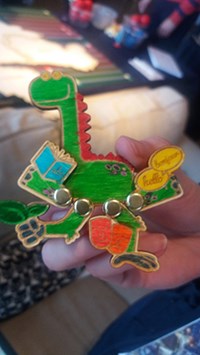 We then found a novel way to engage members of the public focused solely on the statistical iMCD survey findings – creating colourful 3D models. These were presented in a way that aimed to promote meaningful, accessible dialogue with a range of audiences, of all ages, at public events such as Glasgow Science Sunday and the ESRC Festival of Social Science event at Ikea.

The objects created include a moving map of Glasgow, which visualised the relative mean scores of Health, Ecological and Financial literacies in 8 Greater Glasgow local authorities. The second object was a digital quiz, which participants could take part in – receiving a token for the correct answer. Finally, participants were invited to create their own literacy persona by attaching limbs to a central badge to represent the literacy skills they see as their strengths (e.g. reading/writing, maths, science, artistic/creative, cultural, digital, foreign language, and geo-literacy).  At our first event (Glasgow Science Sunday) over 150 badges were created, coloured and taken away, and our second event at IKEA produced even more. 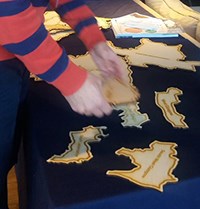 These objects and related activities gave us the opportunity to discuss UBDC’s services, to present video work of the fascinating visualisations going on in the centre, and finally to offer families the opportunity to win a school visit from our team to discuss the importance of wider literacies (above and beyond reading and numeracy) in later life success. We believe that the public and practitioners who shared this experience with us are now better able to engage in family discussions surrounding health and educational inequalities in Glasgow, as well as financial and environmental issues.

We are confident that increasing the scope, diversity and resulting inclusivity of representing data engages a wider audience and will be successful in starting the literacies conversation.

The team at IKEA: 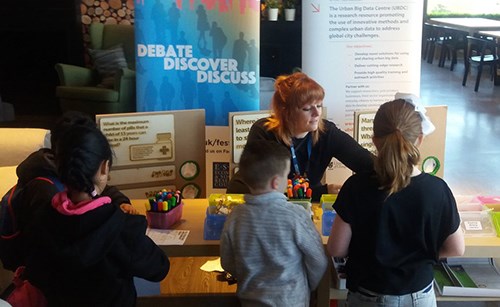 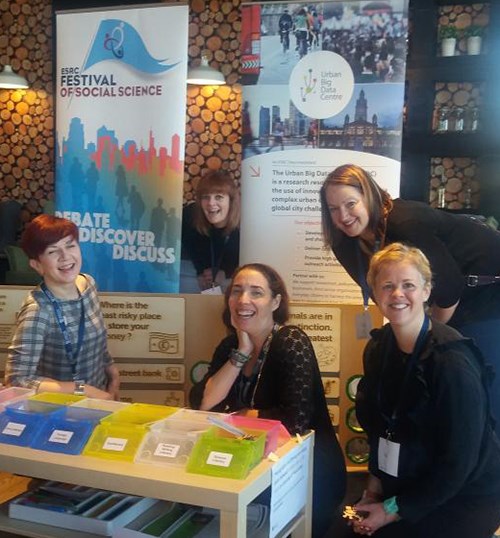 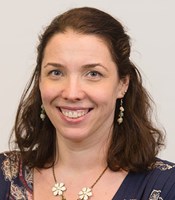 Professor Catherine Lido is a Social Psychologist in the School of Education, University of Glasgow, Associate Director of Urban Big Data Centre and Deputy Director of the PASCAL International Observatory. Professor Lido has nearly 20 years experience lecturing and researching the psychology of stereotyping, prejudice and diversity.