In this blog post, Carla Cebula from the visNET project outlines how they collected rich quantitative data on the professional networks of women early career researchers’ (ECRs) in science, technology, engineering and maths (STEM) fields to complement qualitative data on their networking and collaboration barriers with the aim of reducing the gender bias in academic STEM careers.

She explains the benefits to taking an egocentric approach, including the ability to use the network visualisations as a professional development tool and the ability to capture a much richer quality and quantity of data on the ECRs’ professional connections from the ECR’s perspective.

Although the numbers of women undergraduates has been increasing in STEM disciplines, there continues to be a lack of representation in the highest positions and this can be partly explained by the increased dropout rates of women at the ECR career stage, around the postdoctoral level. Many barriers have been identified for women in academic STEM, and STEM more broadly. However, this transition from ECR to independent researcher is understudied and little is known of the career-phase specific barriers that women researchers face. But we do know that collaborating internationally and with industry can assist this career transition for both men and women. But what are the barriers to these types of collaborations and to the networking needed to reach this?

The answer is; to our knowledge, no one has really asked the question!

However, two gendered barriers explored within the literature are closely related to networking and collaboration, the ‘old boys club’ and the ‘chilly climate’.

The ‘old boys club’ is when women are excluded (usually implicitly) from informal professional networks, meaning that they don’t have access to the same unwritten rules of the academic system as their colleagues who are part of these networks. Quantitative research has also found that men in academic STEM tend to collaborate with more men, which could act to reduce women’s opportunities to break into departmental networks. We also felt that the literature on the ‘Chilly Climate’, whereby a “chilliness arises from explicit and implicit messages that convey to women that their gender could be a liability in STEM settings”, was a plausible barrier to networking and collaboration. While there are often clear distinctions between professional and personal connections for academics, past negative interpersonal connections in “chilly climates” are likely to impact women’s enthusiasm for networking while positive professional relationships are likely to facilitate better, more long-lasting collaborations.

We wanted all our data collection to utilise the knowledge we have, but also to address the ‘holes’- particularly, the barriers specific to women ECRs in STEM fields that are directly related to networking and collaboration. So now, on to the data!

There are two main approaches used in social network analysis (SNA), sociocentric and egocentric analysis. Sociocentric studies focus on the network of a whole group, often an organisation, but these studies can include individuals connected through other shared structures, such as attending an academic conference or using a specific hashtag on Twitter. Egocentric analysis instead “forms around a particular social actor, be that a human actor or a corporate actor”, in our case an early career researcher, and captures their ties with others, often referred to as alters. In our case, the alters are those that the ECR deemed important to their professional network.

An egocentric approach was selected primarily because our focus was following our cohort across time, tracking their network change, so it makes sense to centre our analysis on their professional networks rather than their position within a sociocentric network. It also allowed us to explore the subjective aspect of the data collection process, getting the cohort to consider who they deem important, something that we recognise may change over time. Additionally, we wanted to get a better understanding of who and how the cohort interact with in their professional environment, drawing on the barriers and facilitators to networking and career progression identified in the literature, so we also collected data on the alters and the cohort’s relationships with these alters. This was a further benefit of using an egocentric approach, as it allowed us to collect a much larger quantity of data about each alter within the network. The data we collected included:

Each of these variables very much captures the cohort’s perception of the alter. For example, influence is how influential the cohort deemed that individual to be in the ECR’s area of research and relationship warmth is how they perceived the relationship, which may not be reciprocal.

The network data at the first time point was collected at a face-to-face interview with the cohort members and they were guided through the process of drawing their network on a sheet of paper. The additional data collected on the alters was done by going over each person that the cohort member had identified in an ‘interview style’, with the researcher completing a spreadsheet, but in later iterations they were presented with a table where they could complete the information themselves. This was then coded into a format that could be read by R and we used the igraph package to turn these into visualisations that can show the characteristics of the alters and the cohort-alter relationships. In the visualisations below we have shown the warmth of the ECR-alter relationship in the connection colour, the sector of the connection in the node colour, the node size reflects seniority and the node shape, the gender. These visualisations allow for easy identification of patterns both by the research team and the cohort, for example, the first figure is dominated by purple, showing that they have few contacts outside academia while the second has a number of ‘cooler’ relationships, particularly with their connections to their government and third sector colleagues. 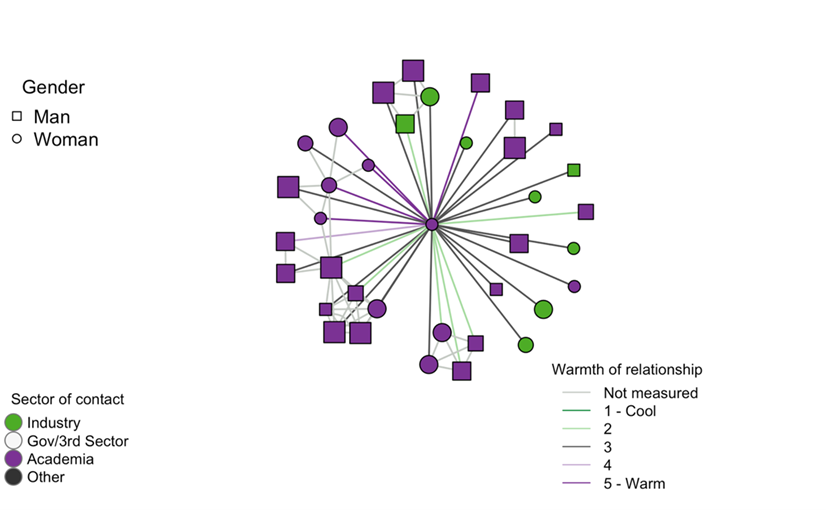 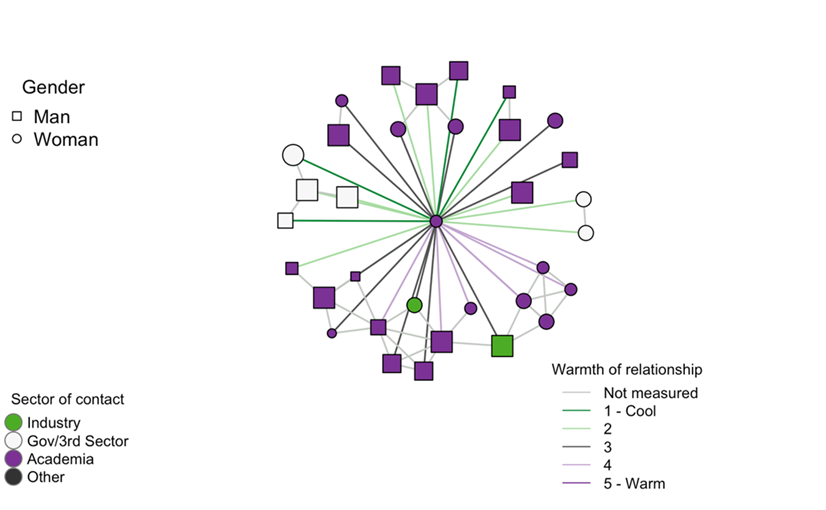 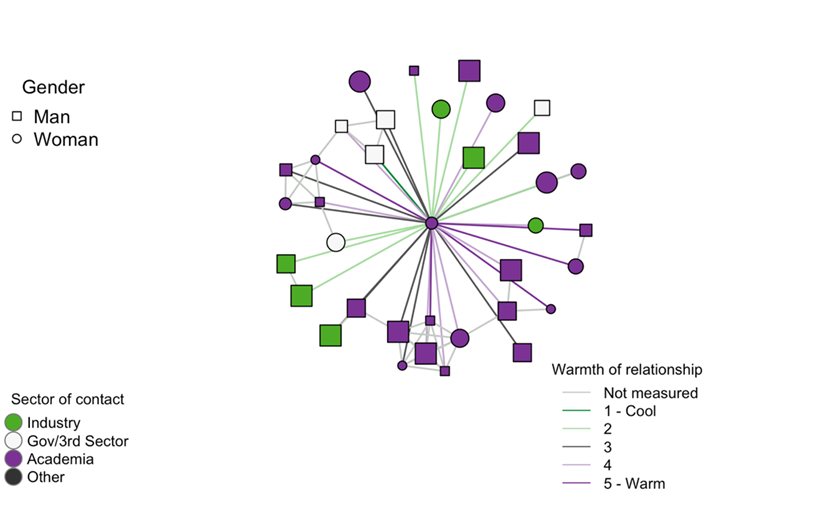 For future data collection points, these networks (not anonymised) were shared with the cohort members in a worksheet, prompting them to update the network with new connections as well as updating any change to their connections (such as career moves) and relationship changes. We also used these visualisations to support the professional development of the cohort, using them during the peer mentoring session on ‘auditing your professional network’. We encourage anyone, but particularly ECRs, to have a go at drawing and auditing their professional network, it has proven to be a highly useful exercise for our cohort.

Egocentric SNA has two main strands of analysis, structures of networks and characteristics of those in the networks and their ties. This means that just like with sociocentric approaches it is still possible to look at things such as gender homophily, we find that most of our cohort have more than 50% of their network being men, and prevalence of other characteristics, such as over-representation of the academic realm. We can also look at the structures within the networks and how these change over time. For example, it is possible to use measures of density or bridging (in a more structural analysis), to see how the cohort utilise their network structure to link clusters of contacts.

We complemented these network growth analyses with a more qualitative interpretation. As the sample is a relatively small size, to classify the network visualisations by key patterns present across the cohort’s ego-nets at time-point 1 finding 4 distinct patterns: a reliance on manager/lab, closed clusters, isolated and unconnected contacts and interconnected contacts. We believe that these could be relevant to the barriers that have been identified within our interviews and again show the strength of using data visualisations in combination with other quantitative and qualitative methods.

The data above comprise part of an upcoming paper, where we discuss more fully how such data sits within both repeated measures surveys and longitudinal in-depth interviews collected using Motivational Interviewing approaches to orient our cohort towards career goal achievement. This research, which began one year prior to Covid-19, has proved timely and functional given the push to online working practices and networking. We envision many applications of the above approaches to professional network growth for early career women in academia, and would welcome the chance upscale our data collection by creating a professional networking self-assessment app that can draw and then create the data for analysis and encourage more explicit reflection on the role of networking in one’s professional development.

To read more about the project you can check the visNET website and our work where we weighed in on the recent controversy on gendered approaches to mentoring and the impact of COVID-19 on inequalities in academic STEM. 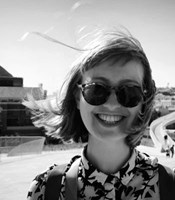