Citizens at the City’s Heart (Catch!)

This collaborative project put citizens’ data at the heart of city transport planning.

The Citizens at the City’s Heart project (Catch! for short) was funded by Innovate UK, led by Travelai and involved the Urban Big Data Centre, the Consumer Data Research Centre, Transport Systems Catapult, transportAPI, elgin, Coventry City Council, Ipswich Borough Council, Oxfordshire County Council, Leeds City Council, Newcastle City Council and the behaviouralist. The project was born out of a desire to generate better data for use in transport planning, and ultimately to make moving around cities easier.

The Catch! project aimed to improve the travel data gathering process by allowing people to collect their own data and make it available to their local authorities, to improve transport and planning in their area. The crowdsourced data is collected via a useful travel planning app that, with user consent, tracks the location of the user and what mode of transport they are using. The app uses GPS signals, as well as machine learning algorithms that use the phone’s sensors to guess what mode of transport is being used.

UBDC's role in the project focussed on making sense of the GPS points and ensuring people’s identities are protected. This involved:

The resulting data is not only in a useful format for planners but also in a format that protects the identity of the app user.

Although our role in the project is now complete, the beta version of the app can still be downloaded from the App Store and Google Play. 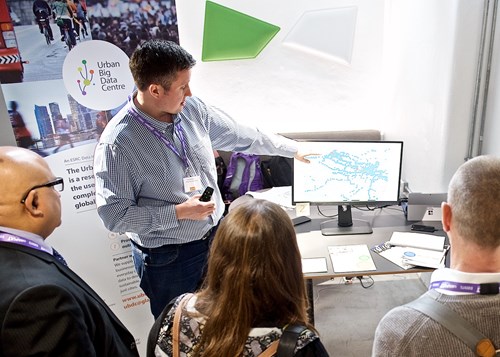 (Dr David McArthur demonstrating our work at the Catch! Showcase event on 13 March 2018.)