We regard data-driven policies and interventions as precursors for promoting active travel (walking, cycling, etc.); however, traditional data sources are often not sufficiently detailed to support them.

In this blog, Dr Mohammad Anwar Alattar explains the background to his team’s research into active travel using crowdsourced data from UBDC and shares some of their findings.

Emerging crowdsourced active travel data obtained from smart devices frequently outperform traditional data. Among other features, crowdsourced data has fine spatiotemporal resolution. The overarching aim of our work, entitled 'Towards Active Travel-Oriented Cities - GIS Analysis Using Crowdsourced Data with the City of Glasgow as a Case Study', is to examine the use of crowdsourced data to deepen our understanding of the behaviour of active travel users and their interactions with the built environment. The thesis is composed of several intertwined studies. In this post, I will present the key contributions to this work.

Using one of the most popular crowdsourced data sources, Strava, coupled with OSMnx (a python package to retrieve, model and analyze street networks), we were able to identify – to a large extent – types of street features that are desired by cyclists. Our approach is characterized by replicability and by using the entire City of Glasgow as a case study. One of the main findings was that cyclists avoid intersections; therefore, Green Waves (coordinating traffic light sequences to provide a non-stop corridor for cyclists) might encourage cycling by increasing cyclists’ comfort (read the full paper).

PPGIS is a form of participatory mapping where non-experts are asked to map a certain topic. This research instrument has been used to gain better insights about Strava. It was found that Strava users are more likely to be younger, more fitness-oriented and proficient in smart devices compared to their non-Strava using counterparts. This suggests that PPGIS can be used to complement Strava datasets and provide more robust data on a wider variety of users (read the full paper).

Crowdsourced datasets open new horizons to better understand active travel and travelling patterns. Results from our work can be applied to other understudied active travel modes such as walking and using mobility aid equipment. Furthermore, we encourage future researchers to take the advantage of the offered crowdsourced datasets provided by UBDC, such as Tamoco Data and Huq Data, to explore more potential applications and methods. 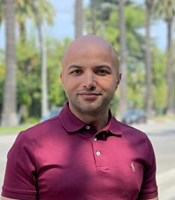 Dr Mohammad Alattar is Assistant Professor at the Public Authority of Applied Education and Training (PAAET) in Kuwait, he completed his PhD in Environmental Geography at the University of Aberdeen and his MSc in Geography at King's College London. His main areas of interest are Geographic Information System (GIS) and spatial analyses.