Glasgow and many other cities worldwide have reacted to the COVID-19 crisis by quickly implementing active travel infrastructure to enable people to move around urban areas for essential business, such as shopping, and exercise.

More people walking and cycling brings benefits to the city; both in terms of decreased congestion and pollution as well as freeing up space for physically distanced public transport use. In this in-depth blog, Alistair McCay investigates the detailed design of the temporary cycle infrastructure introduced in Glasgow (the home of UBDC) and considers how we could further improve safety for those cycling at such temporary junctions.

Who do we want to enable to cycle with the temporary infrastructure?

It is no good if only experienced urban cyclists feel comfortable using the temporary infrastructure, both because we will not get enough people cycling to justify the effort but also because we won’t realise the wider health benefits of a more active city. There are further equality issues, as we want to enable people of all ages and abilities to get around using this infrastructure. One of the key quality criteria we use when teaching cycle infrastructure at University of Glasgow is whether we would feel comfortable with an unaccompanied 12-year-old child using it (these criteria were developed by Robert Weetman and Sustrans).

Cycle infrastructure must be both objectively safe and also feel safe to enable all ages and abilities to use it. Data from the USA (National Highway Traffic Safety Administration's Traffic Safety Facts 2011 Data: Pedestrians, United States Department of Transportation. Accessed May 22, 2013) shows that a significant proportion of people who are struck by vehicles are those crossing at junctions, despite these being supposedly safe places to cross the road. People cycling appear to face similar risks at junctions, with some studies showing half of those killed while cycling were at junctions.

Is it possible to create safe junctions using temporary measures?

First, let’s take a look at what a good quality permanent junction looks like. The image below (taken from the BicycleDutch video explaining the concept) shows the standard Dutch junction layout in A. Placing cyclists in clear view of drivers is what makes this junction layout successful. B shows the angle between the cyclist and the driver while waiting at the junction. Even if the driver was focussed on the lights ahead, they would still clearly see the cyclist. Whereas C shows the situation where the cyclist and vehicle happen to meet while in movement. The tight corner forced the driver to slow right down and the kerb means that it is more difficult for them to inadvertently sweep into the path of the cyclist. This both reduces the likelihood of a crash and the severity of the injuries for the cyclist. 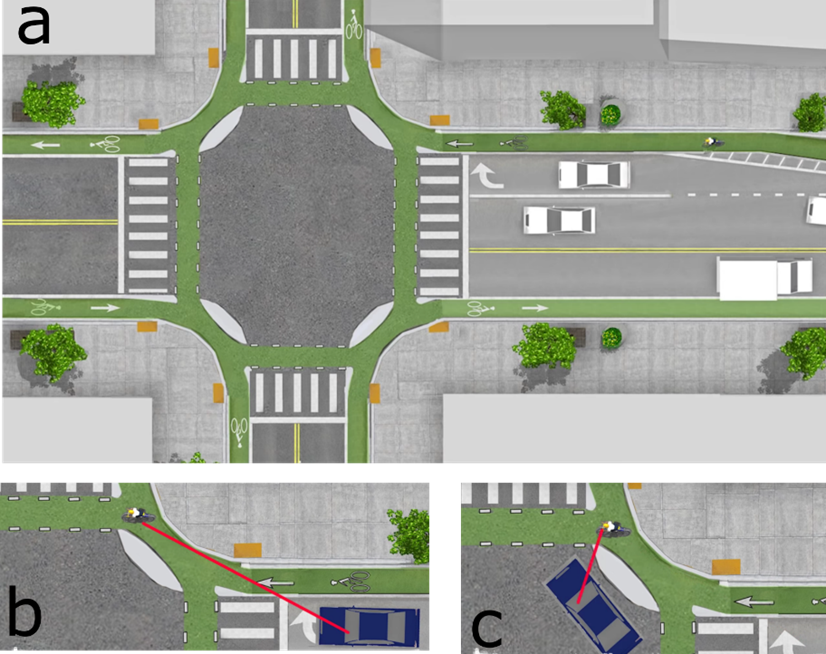 Berlin was one of the first places to issue clear guidance on the design and implementation of emergency cycling infrastructure. An English translation of the Berlin guidance can be found on our website. Below we can see the junction layout from the Berlin guidance. The cycling stop line (shown in yellow) is slightly further forward than the driving stop line (white line). Those driving do not have an immediate view of people who are waiting in the cycle lane. The lead driver may notice someone cycling who is waiting at the stop line but not notice others who are waiting further back due to physical distancing. We all make mistakes when driving, but if a driver doesn’t fully check and then turns left into the path of the cycle lane it could result in a collision and lead to serious injuries for the cyclists. 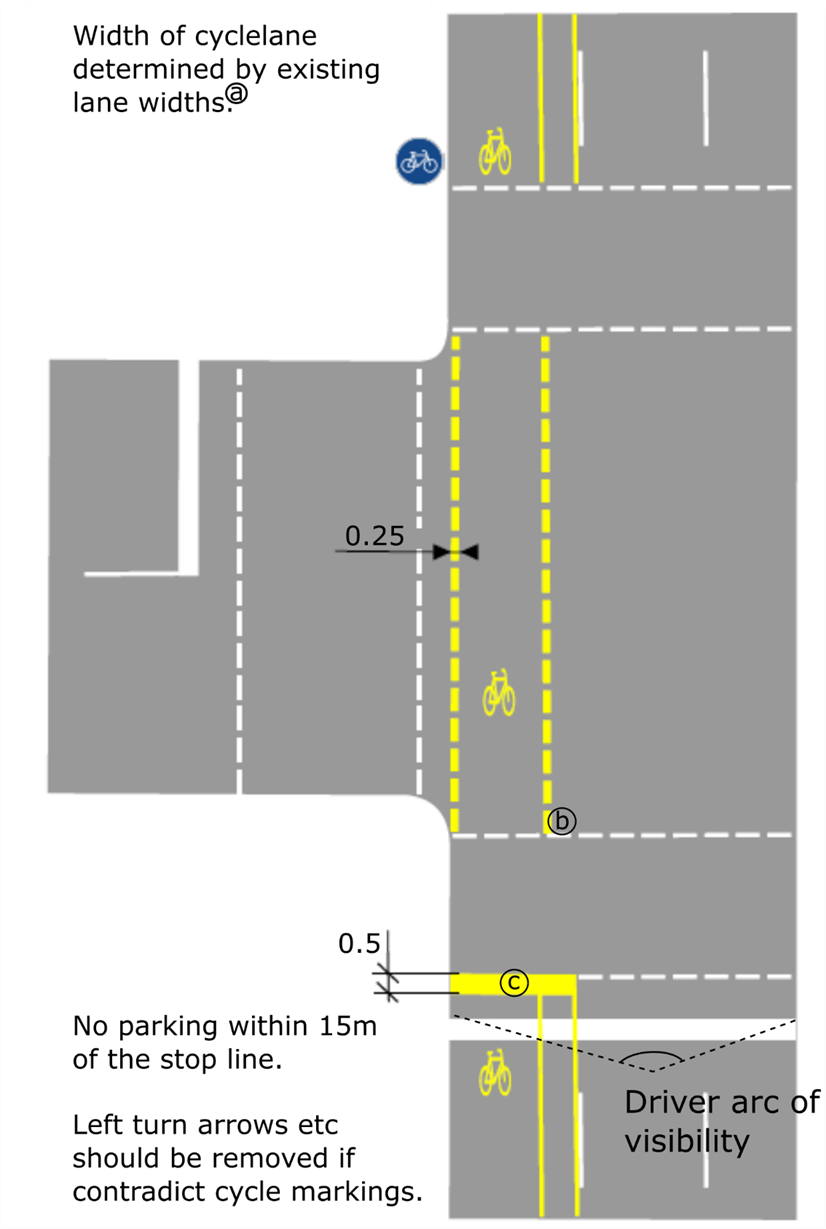 In its first emergency cycle lane, Glasgow has implemented a slightly different layout to that found in Berlin. The Glasgow layout (shown in the images below) sets the driving stop line significantly further back. This is likely because the layout is an adaptation of the Advanced Stop Line common at UK junctions.

The reason this layout is an improvement is that it readily places cyclists in clear view of drivers. It also invites cyclists turning right at the junction to put themselves in front and directly in the eyeline of those driving straight on or also turning right, rather than trying to mix in during the manoeuvre. The sketch below shows that drivers have a clearer view of those cycling left, straight on, and right while waiting for the lights to change. Although drivers could still make mistakes at the junction, despite seeing the cyclists, this layout reduces the risk of not seeing those cycling at all. 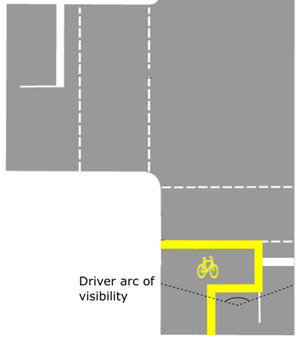 Fortunately, engineers are never satisfied and will always be identifying issues with current designs and looking for ways to further improve. For example, an issue arises when drivers roll their vehicles forward over the stop line before stopping, impairing their ability to see cyclists. Consider the two examples below. In the left image, the driver will likely be aware of the first cyclist even if they were concentrating on the traffic lights. However, the driver would have had to make a conscious effort to notice the second cyclist at the junction. In the right image, notice how the person cycling has sensibly also stopped in a forward position to place themselves in the clear view of the driver. Ideally, we would not wish to rely on such skilled judgements if we are to enable people of all ages and abilities to cycle in our cities.

What could we do to address visibility issues that are quick and simple to implement?

Brian Deegan from Urban Movement has developed a resolution to the above issue by incorporating a readily available temporary traffic light. The driver stop line is moved 18m back from the cycling stop line, as shown below. However, this is an unusual set-up so many drivers might roll through and stop at the advanced cycle stop line instead. That is where the temporary stop light comes in. Placing a temporary traffic light at the stop line, far back from the junction, could encourage drivers to stop there instinctively. We could also add the familiar red “when red light shows wait here” sign whilst making it clear that this refers only to those driving.

The Dutch junction design shown at the start of this blog prevents two key hazards: the first is an obscured view of those cycling while the second is drivers cutting across the designated cycleway. In the image below, we can see how a driver has started their turn on the Glasgow layout (without indicating, in this instance) within the cycle waiting area. Someone cycling straight on may not have anticipated such a manoeuvre, which could lead to a collision.

Below is a sketch showing how the placement of cones with a water-filled barrier could help minimise the risk of left-turning vehicles sweeping into the path of someone cycling straight on. The barrier effectively tightens the left turn for drivers, forcing them to take the turn slower and further out into the junction. Larger vehicles (such as bin lorries and buses) have wide swept paths when turning which may limit the use of such water-filled barriers at tight junctions. However, the UK and international design guidance have adequate information about dimensions required for different turning vehicles. The result of getting it wrong is a large vehicle bumping into a large plastic object filled with water, which I would argue is a preferable situation to colliding with a cyclist. Such step by step refinements are part of the design process. 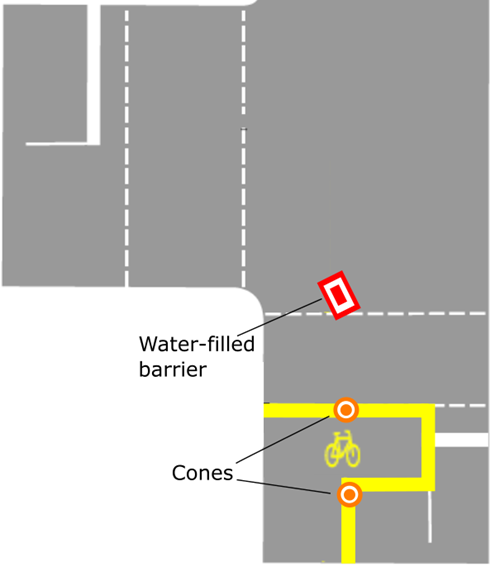 The COVID-19 pandemic has created unprecedented haste in many cities to install active travel measures, but such haste can be advantageous. The temporary nature of such measures enables rapid deployment, assessment, and improvement; essentially fast-tracking the usual Embodied Making design process as outlined by the Urban Cycling Institute, University of Amsterdam. Part of this assessment requires dialogue to ensure we do not inadvertently cause harm through these measures. Hopefully, we can expect to see improved permanent active travel infrastructure designs emerge from this learning, leading to safer streets and healthier citizens in the long term.

Alistair is a lecturer in Civil Engineering at the University of Glasgow and joined UBDC in 2020 as an engineering associate.