The city centre cordon count has been used to monitor changes in cycling and pedestrian trips into and out of Glasgow city centre for over a decade.

This survey is important for several reasons. Transport in Glasgow is in the midst of a transformation from a car-dominated system to a sustainable transport system, where most journeys are expected to be undertaken on foot, by wheeling, by bicycle or on public transport in line with the sustainable transport hierarchy - see diagram below (Source: pedalonparliament.org). 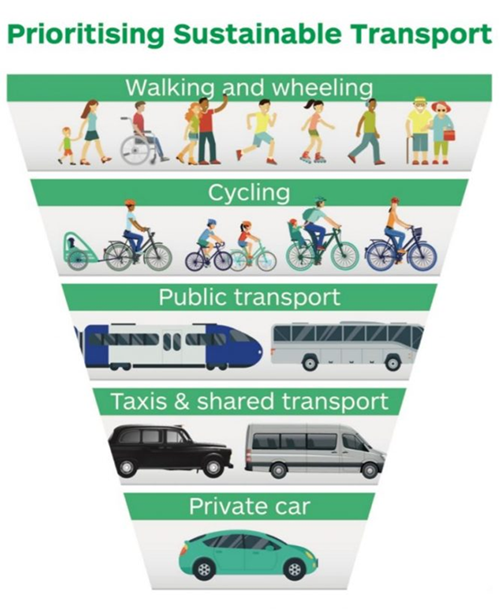 This shift is necessary to reduce the city’s carbon emissions (currently one-third of CO2 emissions are due to transport) to address air pollution and to create more pleasant and healthy places to live and work in (Liveable Neighbourhoods). Approximately 350 deaths a year in Glasgow are attributed to air pollution from small particulate matter - PM2.5 (study link) - and yet we know there are significant health benefits from active travel. In 2011 over 46,000 Glasgow residents were active commuters and the annual health economic value to the city of active commuting - in terms of reduced mortality - was estimated to be £136 million (study link). In addition, four in ten cycling commuters (44%) and the majority of pedestrian commuters (54%) met the daily physical activity guideline of 30 minutes of moderate physical activity solely through their commuting journey.

Glasgow has ambitious plans to be a net-zero city by 2030, is introducing a low emission zone and is finalising active travel and transport strategies that aim to reduce car use and support a shift to sustainable modes. This shift is also an opportunity to address transport poverty and transport inequalities in the city, and to achieve a 'just transition'. For example, we should be aiming to make cycling more attractive to girls and women, to enable people to remain active later in their lives through walking and cycling and to ensure that people from our most disadvantaged communities benefit from the increased investment in active and sustainable travel.

The cordon count has been conducted over 2 days in September since 2009. The weather on most of these census days appears to have been generally mainly dry, with 2016 and 2017 being wetter exceptions. The 35 cordon count locations cover all the entry and exit points around a city centre cordon delineated by the River Clyde in the South, the M8 corridor in the West and the North and the High St/Saltmarket in the East. The map below illustrates the 2021 Cordon Count locations. 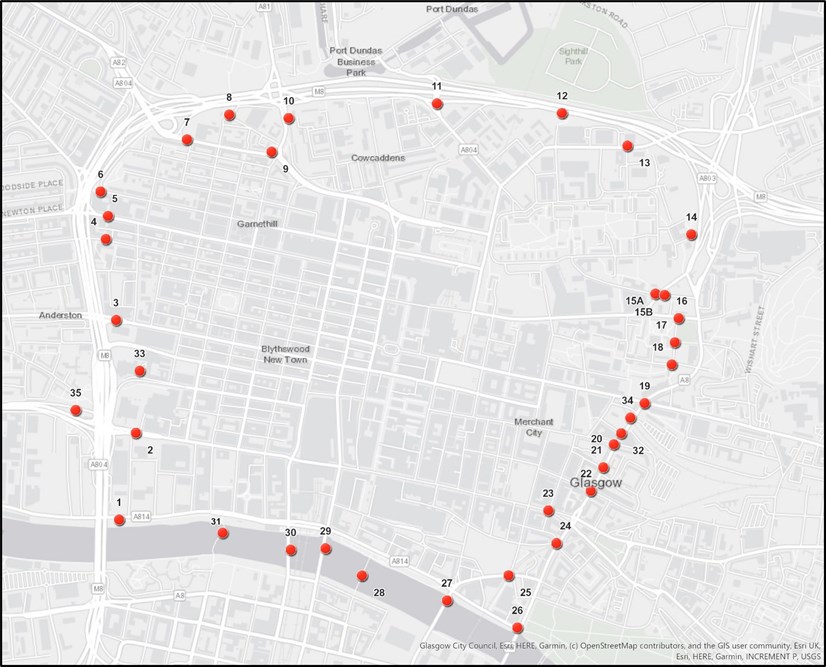 Over 12 years (2009 – 2021), there was an increase in cycle counts at the majority of locations (30 out of the 35 sites) and an overall increase in cycle traffic of 165%, equating to an average annual increase of 14%. In contrast, pedestrian counts dropped overall by 19% over the period, although there were still rises at 11 of the cordon locations. However, these overall trends mask the impact of the pandemic. The trend graphs below illustrate a more nuanced pattern.

Graph of cycle trends based on the cordon count 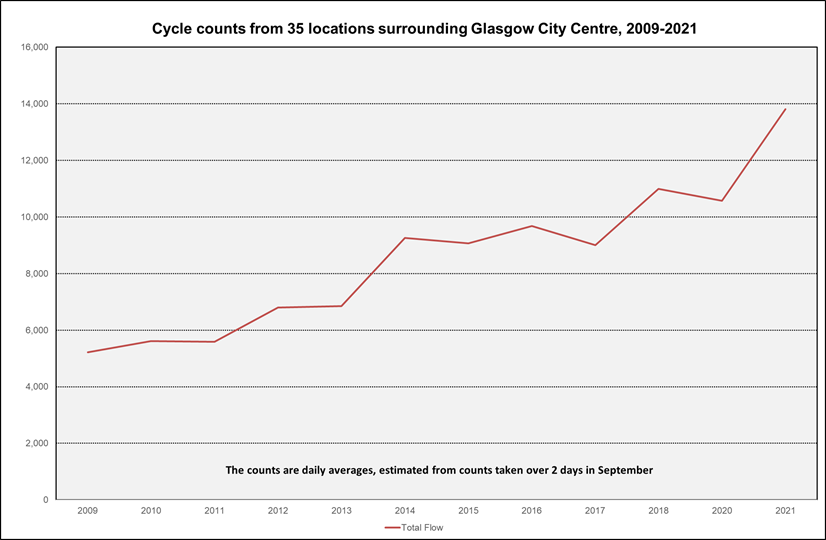 The counts are daily averages of the total flow into and out of the city, estimated from counts taken over 2 days in September. After steady growth in cycle traffic in the decade up to 2018, there was a slight dip between 2018 and 2020 and then counts rose sharply again in 2021. Newly introduced cycling infrastructure appears to have had a significant impact on cycle trends at particular locations:

The Spaces for People programme, introduced to make it safer for people to travel actively (walking, cycling or wheeling) during the Covid-19 pandemic, has allowed Glasgow to install approximately 40km of additional dedicated cycling space much of which will be made permanent. It is plausible that this has contributed to the upward cycling trends observed since the start of the pandemic, although other factors may have played a part such as people’s reluctance to use public transport during the pandemic pushing more people toward cycling.

Previous research has demonstrated the positive impact of new walking and cycling infrastructure in Glasgow. The opening of the Tradeston (or Squiggly) bridge [location 31] in 2009 was associated with a sustained increase in walking and cycling into Glasgow city centre from the southside of the city (study link). Subsequently, the success and expansion of the city’s ovo/nextbike bike share scheme (introduced in 2014), the completion of the West City Way (opened in 2013) and South West City Way (opened in 2015) and the developing South City Way are all likely contributed to rising cycle levels in the city.

Graph of pedestrian trends based on the cordon count 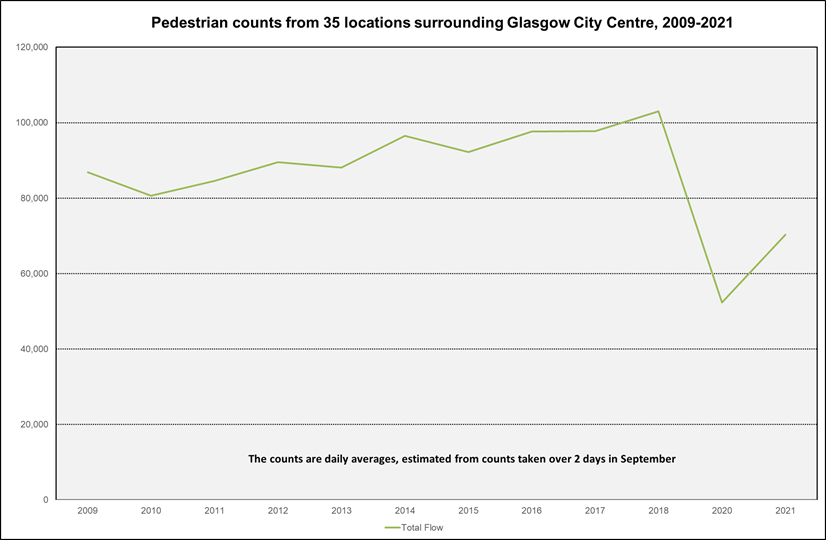 There was a steady overall rise in people walking in and out of the city centre up to 2018, equating to annual average growth of 2%. However, when the pandemic struck restrictions on work and travel led to a sharp decline in pedestrian journeys to and from the city; between 2018 and 2020 pedestrian counts almost halved, although there was a modest recovery in 2021. This pattern is seen on many of the popular routes for accessing the city such as along the Broomielaw, on the Argyle St footbridge over the M8, on Argyle St, St Vincent St and Bath St in the West; on Garscube Road and Craighall Road in the North; on Cathedral St, Rottenrow, Duke St and Ingram St in the East; and at Glasgow Bridge and on the Tradeston Bridge.

Two routes have bucked this trend. There has been a rise in pedestrian traffic at Saltmarket/Clyde St Junction [location 26] in 2021, possibly due to some people returning to work in the city centre and accessing Glasgow Green for exercise. Additionally, the pedestrian count on King George V Bridge [location 30] almost trebled in 2021. This is likely to be the result of a shift of pedestrians away from the Tradeston Bridge due to the construction works at the adjacent Barclays development and because of closures of the Tradeston Bridge for refurbishment works.

Depressed retail activity in the city centre, a shift to home working during the pandemic and continuing advice to work from home may all have contributed to reduced pedestrian trips to the city. These trends contrast with the generally upward cycling trends, which as suggested earlier, appear to be associated with improved cycling infrastructure and possibly some people shifting from public transport to cycling during the pandemic.

As Glasgow’s focuses on meeting its climate change targets - including reallocating road space away from motorised vehicles, reducing air pollution and creating a healthier and more liveable city - it will be important to evaluate the effectiveness of increased investment in active travel. The cordon count offers a useful insight into cycling and walking trends around Glasgow city centre and complements existing automatic pedestrian and cycle counters and newer innovative approaches to monitoring movement around the city using CCTV imagery. 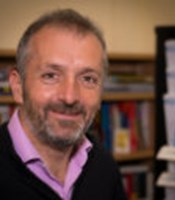 Bruce Whyte is Public Health Programme Manager at Glasgow Centre for Population Health (GCPH). He co-leads the Centre’s ‘Observatory Function’ and is responsible for developing and managing a comprehensive public health information programme. His main areas of work include: managing and developing the Understanding Glasgow website and leading a programme of research on active and sustainable travel.